Cyberpunk 2077. What can you say about it without stating the obvious? The game is somewhat flawed, that’s for sure, but at the same time there’s no denying the world this game presents is wonderful.

But let’s backtrack a moment. Developed by CD Projekt Red, a team famous for its expansive Witcher games, Cyberpunk 2077 has had a long development path. It was first teased in 2012, with the first trailer shown in 2013. The now somewhat infamous release date of “When it’s ready” flashed onto the screen, and people began to hype themselves up for the day that we would finally get our hands on the title. 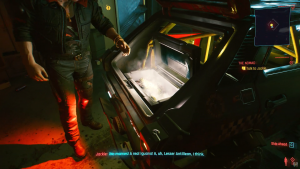 The hype only grew and grew as time went on. Mini documentaries from the creator of Cyberpunk 2020 (the original source of the world and themes of the game), Mike Pondsmith, helped confirm to skeptical long time fans that this was a faithful addition to the canon, and Keanu Reeves being confirmed for a major part in the game’s story brought in a lot of others who would otherwise not have likely paid attention.

“You’re breathtaking!” was a stunning moment for everyone.

But now the game is out, and to those unfamiliar with the genre it has come with a share of controversy and conflict. For those playing on last-gen consoles like the PS4 and Xbox One, people aren’t having the best time. Even on the best PCs out there, people are encountering glitches and bugs, and many can’t get it to run.

But when it does run? When the game works, how is it?
I’m early in my playthrough. Very early. Still in Act 2, in fact. I won’t be giving any spoilers outside of what you could have seen in the trailers, but if the goal of the game was to make the world feel real, they did that. The writing is earnest and delivered with a real weight behind the performance. It feels like a very organic experience when a conversation flows, and whilst the quirks of the lingo (“Choomba” for friend as one example)” can take a while to sit right it certainly helps build the world as a real, living place. 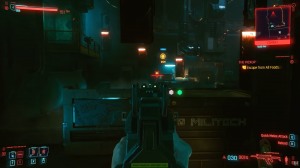 Wandering about the city streets, you’ll encounter a myriad of people in a myriad of fashion and levels of augmentations, or cyberwear. The strangest thing is a person dressed in jeans and a t-shirt on the streets of Night City. The clothing can be outrageous, but it adds to the character of the place, and shifts subtly per area. Go out to the badlands? People wear rougher gear. Head to the city center? Suits and corpos parade those streets. V’s own apartment is surrounded by a fashion show of streetwear.

Add in the organic conversations, gigs and random quests you’ll find around the city, and it really feels like a real place. Sure, the ads littering the place can be a little extra, but considering the source material, it all feels true to form. The game knows when to play funny, and when to play serious, and truth be told I am in love with this part of the game.

But Cyberpunk 2077 is a game, not a walking sim. So, how’s the gameplay? In many ways, people expected something like GTA V when it came to combat and exploration, and in some ways, it isn’t a bad comparison. In others, however, it feels an unfair one. Guns are fairly weak to start, but as you progress you get better options. With the perks trees, you can improve your skills with certain kinds (I’m personally a fan of revolvers), so it does improve as you go. However, melee weapons as a whole are a stronger starting option, and I can see many people opting for this attack route throughout the whole game. Stunlock is a great tactic and one I’ve made good use of as soon as I got a solid long blade. 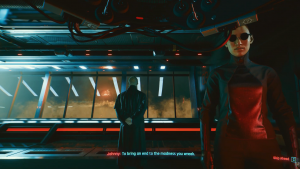 Hacking is also well implemented. It is possible to kill enemies without ever raising a hand, to disable cameras and distract people to sneak past. It’s pretty satisfying to get to shut down a whole gang without even being seen, but often I may open quiet until I get the sword out. Still, the game does let you choose a variety of approaches to every situation, and whilst sometimes it may ask you to go in quiet, or to use nonlethal options, there are even mods for your cyberwear to accommodate for that.

Oh. Cyberwear. It’s extensive. You can change your entire body up if you so wish. But honestly, I haven’t had a lot of time to play with those options. More will open up as the game proceeds, but it is a little too early for me to say much on this. I’m excited to get my hands on the options ahead though!

So, what’s the conclusion so far? The game is fun when it works. It can be awfully buggy, needing a lot of saves and loads when something goes wrong. If you’re trying to play on last-gen, forget it. But for my money? So far, I’m having a blast.

We’ve still got a city to burn, and I am excited to see just how that will happen.